No matter what part of Colorado you grew up in, chances are you’ve seen at least 9 of these landmarks in your lifetime. Anything less, and you should question your legitimacy. Just saying…

Francis VanDeber, who owned Mount Lindo back in the 1940s wanted his wife to be able to see his burial site from their home in Denver’s Park Hill neighborhood. So after his passing, his son had a cross measuring 393 feet tall by 254 feet wide installed on the site.

The School of Mines “M”

“Even the Miners who were in school at the time do not agree as to when the M went up on Mt. Zion. Several use the year 1907, but most likely, the M was born on May 15, 1908 as was reported by the May 9 issue of the Golden Globe. It reported that the Colorado School of Mines would declare a holiday on this day “to place a big, white M on Mt. Zion.”” – School of Mines

One of the most visible features in the Colorado Springs backdrop is this huge vacant area of mountain-top caused by years of mining.

The National Center for Atmospheric Research 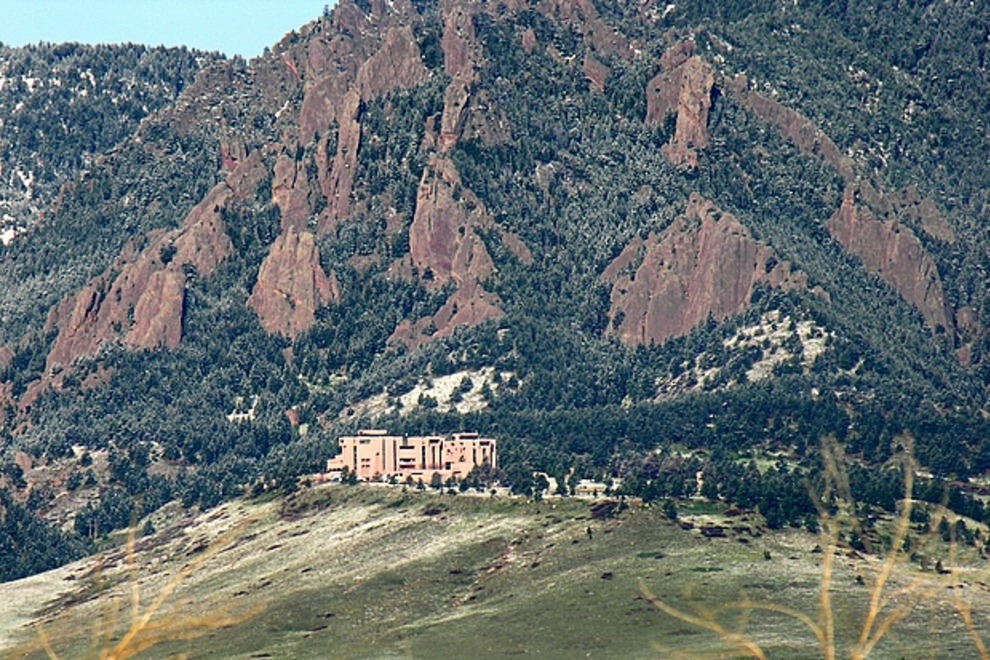 “The National Center for Atmospheric Research (NCAR) is a federally funded research and development center devoted to service, research and education in the atmospheric and related sciences. NCAR’s mission is to understand the behavior of the atmosphere and related physical, biological and social systems; to support, enhance and extend the capabilities of the university community and the broader scientific community – nationally and internationally; and to foster transfer of knowledge and technology for the betterment of life on Earth.” – NCAR

Stapleton opened on October 17, 1929, as Denver Municipal Airport. Its name became Stapleton Airfield after a 1944 expansion, in honor of Benjamin F. Stapleton, the city’s mayor most of the time from 1923 to 1947. This last remnant of Stapleton Airport will soon be transformed into a restaurant and office space.

Colorado’s infamous “Spaceship House” as many of us call it was designed by architect Charles Deaton (he also designed Arrowhead stadium) back in 1963. “Deaton, ran out of money before the house was finished, so it was never inhabited by the designer. The interior of the Sculptured House went largely unfinished and was vacant for almost three decades until entrepreneur and one-time Denver, Colorado economic-development chief John Huggins purchased the house in 1999.” It eventually sold two more times, most recently being sold in 2010 at a foreclosure auction for $1.5 million.

“Buckley AFB was originally constructed as an auxiliary landing field for Lowry Field in 1938. The geodesic domes many Aurora residents might refer to as “golf balls” are radomes which are operated by the Aerospace Data Facility-Colorado and the 2nd Space Warning Squadron. The domes themselves were built in the 1970s to protect sensitive radar equipment from inclement weather and temperature fluxes.” – Buckley AFB

Joe Johnson opened the iconic truck stop back in 1952. At that time it was the 5th location in Colorado and sat alongside what was then considered US Highway 87. Famous for its Cinnamon rolls, Johnson’s Corner was recently sold to Travel America after being a family owned business for over 60 years.

Colorado artist Lawrence Argent designed the 40-foot tall steel and fiberglass blue bear for the The Colorado convention center after seeing a photo in the newspaper of a black bear peering through a window. Since its installation back in 2005 it has undoubtedly become an iconic figure for the city of Denver.

This 32-foot high mustang was designed by New Mexico artist Luis Jimenez. Commissioned back in 1993, the sculpture had to be completed by Jimenez’s sons after a portion of the horse fell on him and killed him in 2006. It was finally installed in 2008 has since been seen by millions of travelers to and from Colorado.

Horsetooth reservoir and its accompanying open space park are definitely an awe-inspiring sight. The reservoir was constructed in 1949 by the Bureau of Reclamation as part of its federal Colorado-Big Thompson Project. The construction of the reservoir inundated the community of Stout. Prior to construction, the majority of the town moved to a location that today surrounds Horsetooth’s South Bay, but a few building foundations, including that of the old school house, are now under water.

So…are you even from here?

This sticks should be titled “you know you’ve lived in the Denver metro area if…” The only ones from this list that aren’t from Denver are scary mountain and Johnson’s corner.

…and HorseTooth…. And The Scar……

Exactly. Well, I even live in Aurora and the only one I recognized was the blue devil horse.

I grew up in Sterling and I still live in Sterling, but I’ve seen everything on this list. You people need to get out more and explore lol

But if we are from Colorado, we should be outside enjoying it, NOT playing this stupid FB challenge.

What about iconic Spanish Peaks? Or what about oldest town in Colorado, San Luis. Or what about Rocky Ford for its cantaloup or watermelon? Or what about the great sand dunes? Or what about pueblo Colorado known for their green chili or the state fair grounds? I guess as a Coloradan, I just don’t know Colorado as well as the person who wrote this article.

I expected to see some iconic natural landmarks like the Flatirons, the Maroon Bells, Mount Sneffels, etc.. The sculptures are interesting, but a reservoir? Everything on this list is either man-made or shows heavy evidence of humanity’s depredation of the landscape. Rather sad.

This website uses cookies to improve your experience while you navigate through the website. Out of these, the cookies that are categorized as necessary are stored on your browser as they are essential for the working of basic functionalities of the website. We also use third-party cookies that help us analyze and understand how you use this website. These cookies will be stored in your browser only with your consent. You also have the option to opt-out of these cookies. But opting out of some of these cookies may affect your browsing experience.
Necessary Always Enabled
Necessary cookies are absolutely essential for the website to function properly. This category only includes cookies that ensures basic functionalities and security features of the website. These cookies do not store any personal information.
Non-necessary
Any cookies that may not be particularly necessary for the website to function and is used specifically to collect user personal data via analytics, ads, other embedded contents are termed as non-necessary cookies. It is mandatory to procure user consent prior to running these cookies on your website.
SAVE & ACCEPT
wpDiscuz